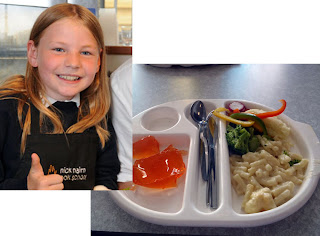 What is it about officialdom that can’t bear criticism or even the merest hint of publicity? Take Argyll and Bute Council, in Scotland. This bastion of bureaucracy has ordered nine-year-old Martha Payne to stop blogging about the school dinners she eats at her school in Lochgilphead, Argyll.

The mighty council appears to be afraid that a little nine-year-old girl might cause it a few problems. Martha runs a blog called Never Seconds where each day she takes a snap of her school dinner, writes a bit about it and reflects on her day. Now, I for one think it’s brilliant that a nine year old is writing a blog, learning to use a digital camera, uploading it to the Internet and sharing her world with everyone. It’s precisely the sort of skills we pay teachers to impart to our young ones.

Martha raises money from her blog for Mary's Meals, a charity which runs school feeding projects in communities around the world where poverty and hunger prevent children from gaining an education. So not only is she a computer whizz, she’s got a great heart and sense of civic duty.

But the council decided to stamp all over Martha. Argyll and Bute Council said it "wholly refutes the unwarranted attacks on its schools catering service" and then made the ridiculous statement that national headlines had led catering staff "to fear for their jobs". Well. perhaps they'd better pull their fingers out and buck their ideas up a bit.

In a statement officials said: "The council has directly avoided any criticism of anyone involved in the NeverSeconds blog for obvious reasons, despite a strongly held view that the information presented in it misrepresented the options and choices available to pupils, however this escalation means we had to act to protect staff from the distress and harm it was causing."

They had to act to protect their staff from the distress and harm caused by a nine year old? Are these people mentally ill? What sort of madness is that?

"In particular, the photographic images uploaded appear to only represent a fraction of the choices available to pupils, so a decision has been made by the council to stop photos being taken in the school canteen.

"There have been discussions between senior council staff and Martha's father. However, despite an acknowledgement that the media coverage has produced these unwarranted attacks, he intimated that he would continue with the blog.

"The council has had no complaints for the last two years about the quality of school meals other than one from the Payne family received on 6 June and there have been no changes to the service on offer since the introduction of the blog."

So, the heavy hand of the unions prompted the pen pushers to cut Martha off at the knees because it might upset a few cooks. Her pictures are unwarranted attacks on a bunch of turkey twizzler reheaters. Oh grow a pair and get real! The school, by the way, was very supportive of Martha.

Now thanks to an Internet uproar, the idiots at the council have reversed their ridiculous decision and Martha’s website has raised £20,000 for a very good cause. I doubt any of the school cooks are genuinely fearing for their jobs (although it looks as if they ought to) and this whole episode just goes to show what a bunch of complete and pathetic arses we have running some of our local councils. I experienced something similar when I was writing my blog in hospital and I doubt whether it would now be possible to do what I did. Institutions like councils and hospitals are becoming so risk averse that even a little criticism cannot be tolerated. This lack of free speech is the sort of thing that Leveson should be investigating instead of running an extended psychotherapy session for has-been politicians.

Notes from a hospital bed

Traction Man
Fractured freelance journalist now released from traction and walking again. Recuperating at home with good food and fine friends. Growing increasingly angry about the scandal of nutritional neglect in our hospitals.